This honest review was provided by Firefighter Edward Monahan of North Lauderdale.

I was recently given the opportunity to try out a new piece of equipment from MSA: the G1 SCBA Equipment. The pack came from David Nummela from Ten-8 fire Equipment here in South Florida. The gear was used extensively at the department and a local fire academy during various training evolutions. (Live fire exercises were not completed per Ten-8’s request.)

The look and feel of the MSA G1 are substantially sturdier and beefy. The materials are top quality and rugged. The pack is also very sleek and virtually free of any tangle hazards. The frame is made from a heavy duty plastic, which at first was questioned by a few members, but when one remembers that extrication struts are also made of a similar grade plastic, that concern is no longer an issue. The electronics are housed inside the lumbar area of the pack keep the weight low, and worn on the waist of the wearer. A lot of thought and planning clearly went into this pack, with primary efforts on user friendliness. Every piece of the pack seems heavy duty, as many portions had to be to meet higher temperature requirements. Government requirements also dictated that low air alarms activate at 33%, and PASS alarm sound tracks are identical among all brands. 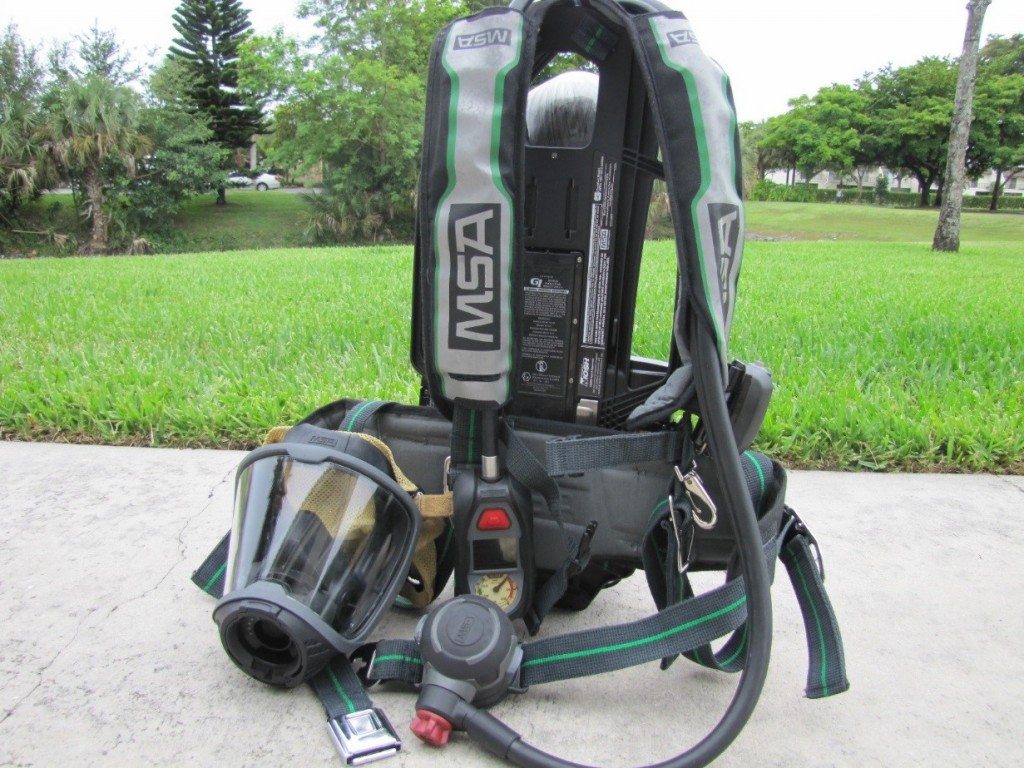 INCREDIBLY COMFORTABLE. Multiple subjects of every shape and size tried the pack and every single time the first compliments about the pack were about how comfortable it was. Although weight differences between various SCBA from different manufacturers are pretty close, the MSA wears it better. The weight is distributed better through the padded, wide, swiveling waist belt and thicker, more comfortable shoulder straps. The increased ergonomics were instantly recognized, and more importantly, still noticeable at the end of operations. The face piece itself has been extensively redesigned and YOU CAN BREATHE THROUGH THIS THING! MSA listened to feedback and redesigned the two way valve on the mask. If you were familiar with the old MSA’s, forget any previous misconceptions. The G1 is much less restrictive than the old Fire Hawk or Air Hawk. Open masks from other brands may still hold a very slight advantage, but not by much. When wearing the mask while not yet connected to air, you barely notice this mask. Also the weight of the mask itself is very light. The MSA regulator attaches to the face piece without swiveling and disconnects rapidly by depressing two buttons. 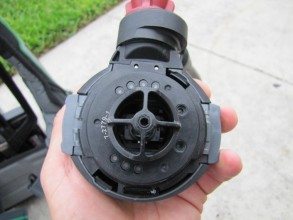 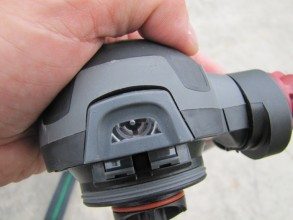 Controls and functions were very intuitive and natural feeling. Users felt familiarity to our current brand of SCBA when using functions. Gauges are redundant and user friendly, and the visibility is fantastic as the LCD screens are extremely bright and easily read. Glow-in-the-dark markings and gauges compliment the pack’s LED lighting systems. Buddy lights and different status lights even allow for other members to quickly gauge your air supply simply based on the color of the LEDs displayed around your pack and mask. The loaner device did not have a buddy breather system, but one is now available.

One of the impressive features of the MSA G1 includes an LED that illuminates the UAC under PASS alarm activation of low air alarms. Another is the design of the dovetail that secures the cylinder. It takes the weight off of the actual cylinder threads or air discharge port. The attention to small details such as these prove that some serious thought went into the design of this unit. 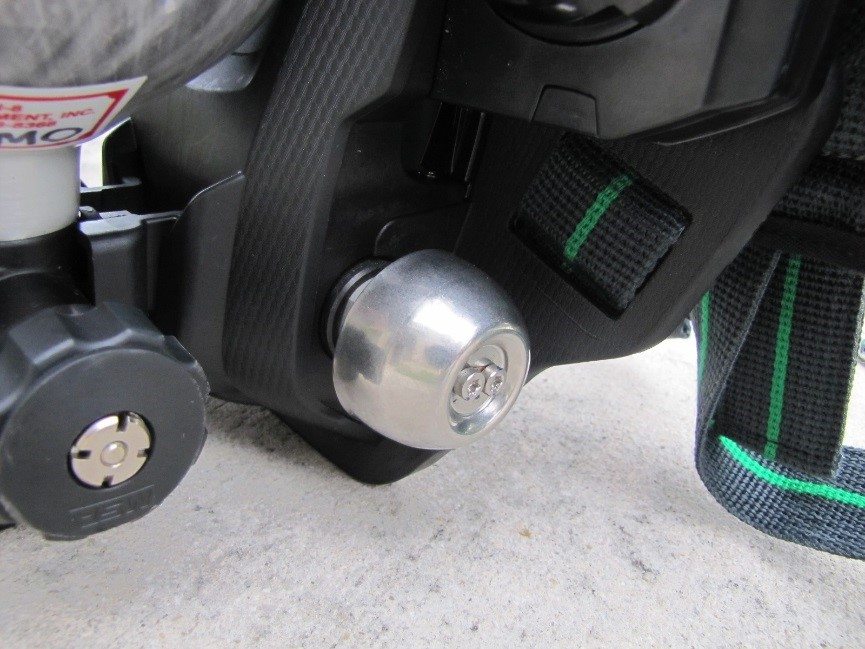 The heads up display and shoulder electronics are simple to operate and offer up vital information easily, and can even display you air supply in minutes. This is a measurement specific to you based on how much air you have been using over the last three minutes. There is also a heat sensor that warns the user when you have been exposed to excessive heat for prolonged periods of time. Should all electronics fail, the pack still relies on the old-fashioned steel bell for a low air alarm and can function in all air delivery capacities. The MSA G1 utilizes modern technology without over-complicating the device, lending itself to an extremely user-friendly package. 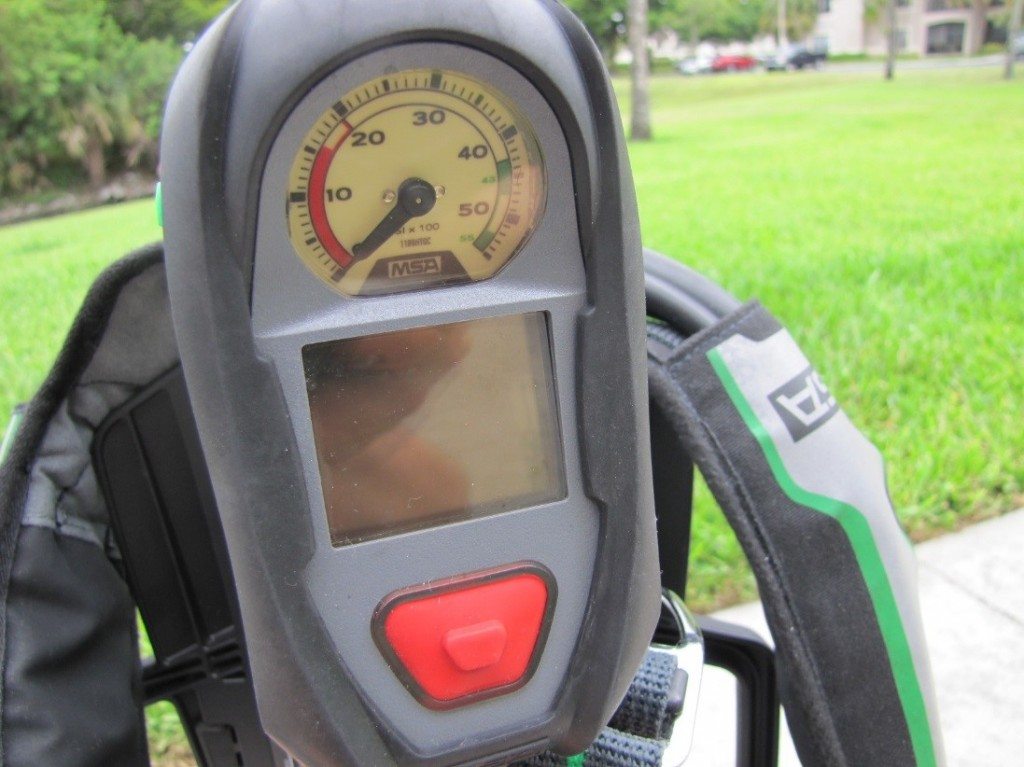 Large bright readouts and glow in the dark analog gauges

The MSA G1 raises the bar with a well thought out design that has been perfectly executed. Insanely comfortable, simple, and tough as nails, with some unexpected features. 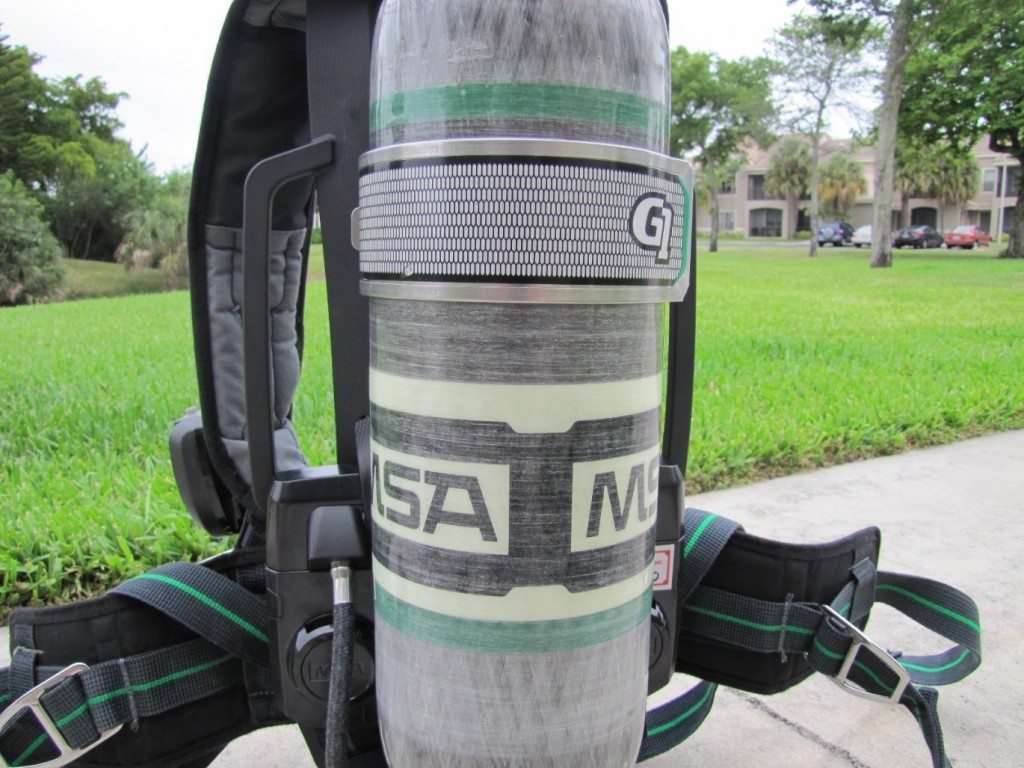